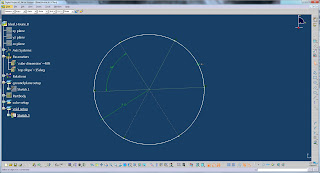 I've been trying to figure out how to generate a cycloid in digital project.  I haven't actually figured out how to 'roll' a circle along a line. Instead I've created an approximation by proliferating the circle to the right, tangent along a horizontal line.

The horizontal line is divided by points at intervals equal to the circumferential distance of the segments.  So you end up with a framework like the one below.  You then have to count points and imagine them rolling to the next point on the line, and trace this with a spline. 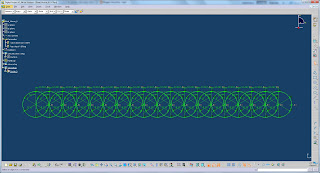 Seems like this might be an approximation, so if anyone has a better method chime in.  Next: setting this up along an irregularly curving line that has some other parameters controlling it, and using circles (and ellipses?) both larger and smaller than the generating  geometry to make loops and wavy lines without cusps.  Basically digital project is the mother of all Spirographs. 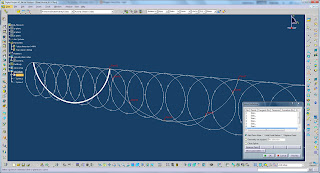 Also I realize you can cut and paste one segment, as it's repeating.  But is there a way that the radius for the generating circle (and circumferential distance it travels) changes with each revolution?  Can you make a 'snowballing' cycloid?
Posted by Ben HD at 7:28 PM