better and better every day!

The work produced, and the working session, this past Sunday were much improved.  Having had some time to work out an understanding of, and build a physical model of, the main idea we settled on at the end of the last meeting, everyone had a concrete place to start the discussion.  Something to talk about (their model), and how to talk about it (a thought out logic for what they made).  Each idea refined, or thought out some aspect of a single module that inflated to open a 'pore' that would allow wind to pass through, while simultaneously expanding to block sunlight. 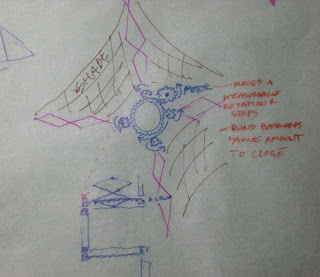 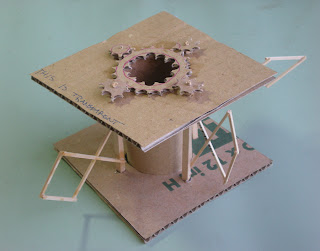 As we initially spoke of the inflation in each module, it resulted from the expansion of a closed volume of gas with heat.  This seemed too uncontrolled to me, so I ended up working on a mechanical version of 'inflation.' (see pics)  4 tiny scissors jacks leap out spreading a shading web.  A single gear turns 4 (or 6, or 8...) screws to drive the 'inflation'.  While it could be possible to work out an open/close mechanism off of the same ring gear, I initially thought of them as separate and only worked out the shading side.  My thinking on this was mainly about reliability, but during Sunday's beginning discussion, it was suggested that these functions should be separate to allow our surface to achieve (and respond to) more varied conditions, so as to take advantage of the benefits of a microprocessor control: 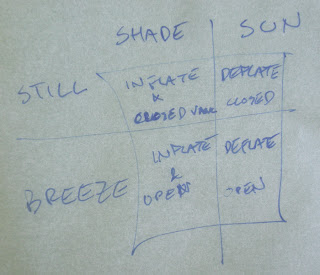 Ultimately my little watch parts were deemed not relevant enough to inflation (I also think they were too intricate).  While we all agreed that relying on heat induced gas expansion wouldn't easily work, the adherence to a mandate that the shading device inflate led to to the development of a very cool pneumatic system.  While there is still a lot to work out in how the shading membrane itself folds and unfolds as it inflates/deflates,  the pneumatic driver side of things seems really fruitful, even for entirely different outputs.  As a simple, single moving part,  it seems to offer promising terrain for the folks that take this over next week. 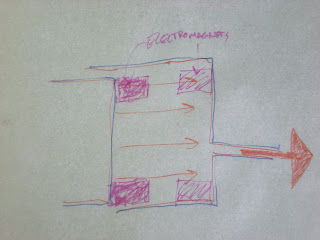